Ahh, summer.  What could be better than warm weather, picnics, hiking and leisurely walks.  Unless, of course, you have the misfortune to disturb a nest of the Bald-faced Hornet.  It seems that every summer I hear of or read about an incident involving this species.  Sometimes by accident , other times by sheer recklessness. 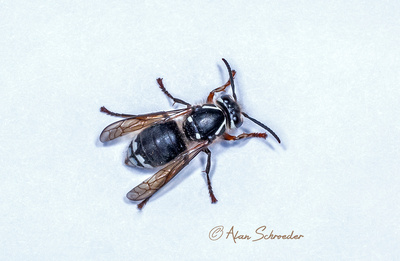 A Close-up of a Bald-faced Hornet, which is not actually a hornet but in the same family as Wasps and Yellow Jackets.

In all my years outdoors photographing nature, honestly, I never paid much attention to hornets, bees or wasps.  It may have been I simply didn't want to get stung or in the deep recesses of my mind I respected their space.  Until two years ago.

I was photographing small moths, late one night, when one landed on my arm.  It was different than the others so I helped it into a jar so I could photograph it.  A quick photo and it was off again.  Later, paging through the guides, I discovered it was a Bald-faced Hornet.  My first thought was, well that could have ended badly.  But my curiosity took over quickly. 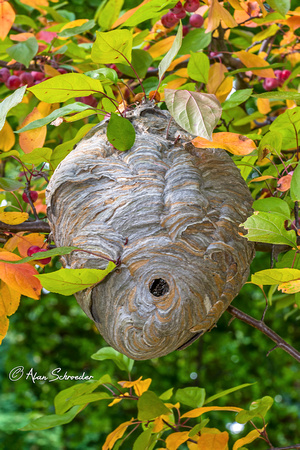 This nest was only 4 feet of the ground in a crab apple tree, totally invisible from three sides. I walked past it almost daily for several weeks before discovering it,

The Bald-faced Hornet, actually, is not a hornet at all but a type of Wasp or  Yellow Jacket and relatively small, about 3/4 of an inch, with white markings on a black body.  Most people are afraid of them, or anything that stings, however, they are beneficial.  They prey on moths and other insects that harm our gardens or bother us, including Yellow Jackets.  They also help pollinate flowers while searching for nectar.

In the spring, a queen, that has wintered over in a protected spot, begins building a nest.  She will lay eggs and care for the larvae until they become adults.  These adults are "workers", and will take over all tasks of nest building and feeding and care of all future larvae.  The nest, a football shaped structure, with an opening at the bottom, is made from chewed wood mixed with a sticky saliva to create a grayish paper like material when it dries  Larger nests may have more than one entrance.

Most often the nests will be hidden in the upper branches of a tree, not seen until the leaves fall.  Sometimes they may build in shrubs or on the side of a building or, as I discovered, only 4 feet off the ground.  A single nest, depending on the size, can contain between 200 - 700 workers.  The "Workers" are all female and have stingers. Unlike bees their stingers do not come out so they can sting as many times as they want.  The "Drones" are males and they do not have a stinger.  Their sole purpose is to mate with suitable females to produce future queens.

The Bald-faced Hornet is not considered dangerous unless they perceive a threat to their nest and then will very aggressively defend the nest.  So don't poke it with sticks, throw rocks at it or fly a drone into it, it may be your undoing. 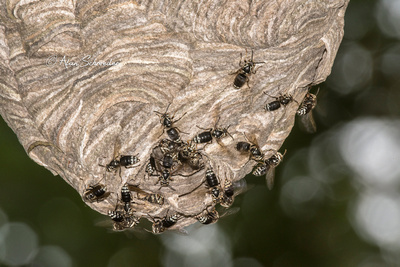 Bald-faced Hornets around the entrance to the nest. I do not recommend getting this close, several were watching me very closely.

Nests are active until late October or early November, depending on the weather,  when entire colony will die off except for the following years queen.  She will find a safe place to spend the winter, maybe in a hollow tree, rock pile or by burrowing under a log.

Most nests will not make it through the winter as birds and animals will take it apart looking for spiders and other insects that take shelter there.

All animals have a safe zone, a distance that they will allow an intruder to approach before retreating or attacking.  Hornets and bees are no different.  Over the years I have learned to keep a keen eye on this.  Some of these photos here were taken at a distance of only 6 feet and there were hornets watching my every move.  I do not recommend anyone try this.  Each nest, each colony, each hornet is different. 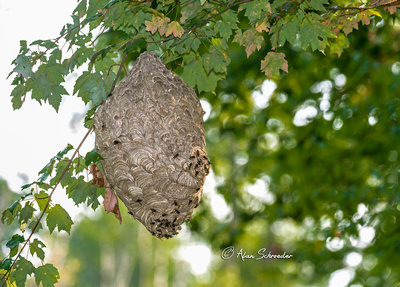 A large Bald-faced Hornet nest hanging in a Maple tree only about 10 feet off the ground. This nest has two entrances, one on the right side and one on the bottom.

Go out, enjoy nature and be safe.

Clicking on the individual photos will give you a larger​ view to enjoy.

All photos are available for purchase for personal or editorial use.

As always questions and comments are welcome.